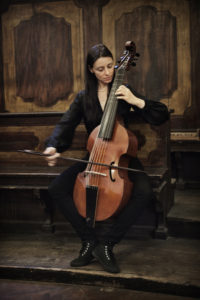 She started studying viola da gamba at the age of eight at the Scuola di Musica di Fiesole (Florence). After obtaining the viola da gamba Diploma at the “Luigi Cherubini” Conservatory of Florence with Paolo Biordi, she went on to specialize with Vittorio Ghielmi, Cristiano Contadin and Rodney Prada (Civica Scuola di Musica of Milan). She also obtained a Political Sciences Degree and a PHD in History of Music at the University of Florence,

From 2003 she devoted herself to filologic execution of ancient music. She played in more than 500 concerts.

She has participated in various on air radio programs, among which Kulturchannel Austria, RadioRai1 and RadioRai3, SkyArte, National Radio of Slovenia.

She actually lives in Bologna where, since 2014, she teaches viola da gamba and chamber music at the “La Musica Interna” School.

Since 2017, she is viola da gamba teaching Professor at the the Conservatory ‘G.B. Martini’ in Bologna.